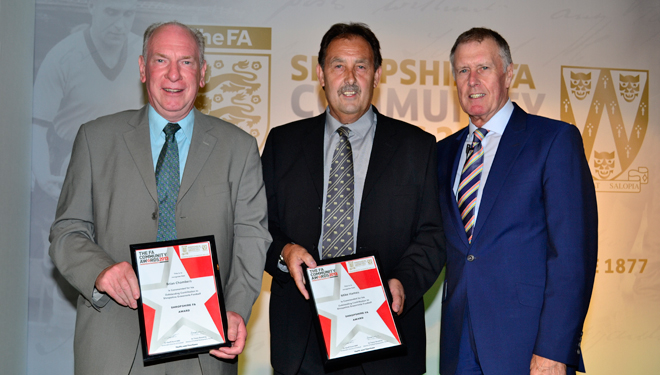 MIKE HAMES – SHROPSHIRE JUNIOR FOOTBALL LEAGUE (centred)
Mike Hames came into junior football in 1992, after being involved in senior football since 1976. During his time with Up & Comers he served as team manager (age groups U10 to U18), was elected chairman in 1996 and lead the club in becoming the first FA CS Club in Shrewsbury before  election to club president in 2004. Mike was elected chairman of the Shropshire Junior Football League in 2000, and was pivotal to the league becoming the first FA Charter Standard League in the Country. He is a Council Member and Director of Shropshire FA and was inducted as a Life Member on the Shropshire Schools & Colleges FA (SSCFA) in 2008.

BRIAN CHAMBERS – WREKIN JUNIORS FC (left)
Described as a ‘Great leader and Chairman of Wrekin Juniors Football Club’, by a fellow club member, Brian Chambers is undoutedly the driving force behind Wrekin Juniors FC. Brian started out as a team manager and has since gone on to take on most other roles within the club. Currently the club secretary and much more, Brian oversees one of the biggest clubs in Shropshire, with 23 junior teams, ranging from 5 to 18 year olds for both boys and girls.