Please help your club and league by treating the Referee in a proper manner. Give him/her courtesy and respect from the time they arrive at your ground and until they leave. Remember: You need the Referee.

Interested in refereeing in the SJFL?
Referee availability pro-forma

Ever tried playing a game of football without a referee?

Referees play a crucial role in helping football take place. From local grassroots football played in a park on a Sunday morning right through to the FA Cup Final at Wembley, every football match needs a referee.

That’s why here at Shropshire FA we are dedicated to producing, supporting and developing a highly motivated and immense talented network of FA qualified referees. Find out more HERE 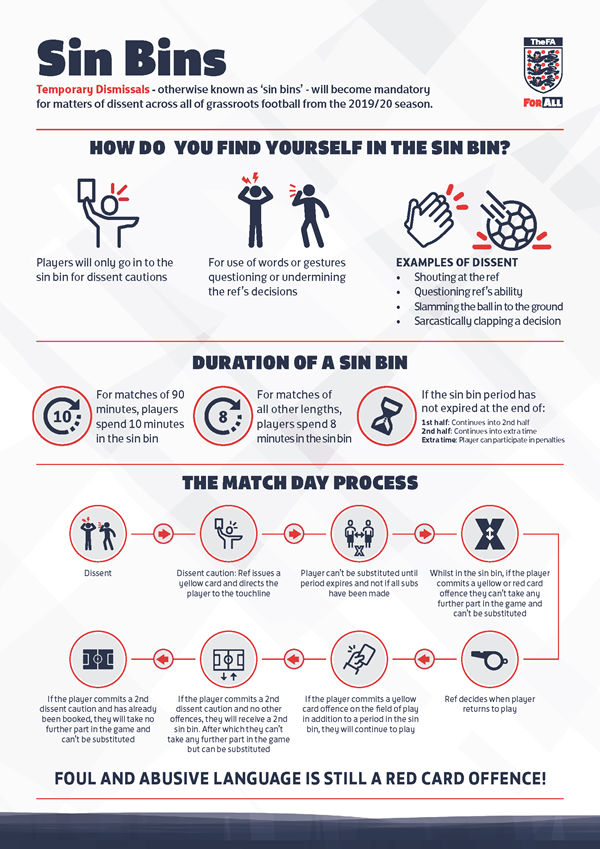 RULE 23 (A) Registered referees (and assistant referees where approved by The FA or County FA) for all Competition Matches shall be appointed in a manner approved by the Management Committee and by the Sanctioning Authority.

(C) Where assistant referees are not appointed each Team shall provide a Club assistant referee. Failure to comply with this Rule will result in a fine (in accordance with the Fines Tariff ) being imposed on the defaulting Club.

(D) The appointed referee shall have power to decide as to the fitness of the Ground in all Competition Matches and that decision shall be final, subject to the determination of the Local Authority or the owners of a Ground, which must be accepted.

(E) Subject to any limits/provisions laid down by the Sanctioning Authority, Match Officials appointed under this Rule shall be paid a match fee in accordance with the Fees Tariff and travel expenses of [0 ] per mile / or inclusive of travel expenses. Check out latest news, fixtures and results at shropshirejuniorleague.co.uk 67 Match Officials will be paid their fees and/or expenses by the home Club before/immediately after the Competition Match, unless otherwise ordered by the Management Committee. Failure to comply with this Rule will result in a fine in accordance with the Fines Tariff.

(F) In the event of a Competition Match not being played because of circumstances over which the Clubs have no control, the Match Officials, if present, shall be entitled to full fee plus expenses/half fee plus expenses/expenses only. Where a Competition Match is not played owing to one Club being in default, that Club shall be ordered to pay the Match Officials, if they attend the Ground, their full fee and expenses. Failure to comply with this Rule will result in a fine in accordance with the Fines Tariff.

(G) A referee not keeping his or her engagement and failing to give a satisfactory explanation as to their non-appearance, may be reported to the Affiliated Association with which he or she is registered.

(H) Each Club shall, in a manner prescribed from time to time by The FA, award marks to the referee for each Competition Match and the name of the referee and the marks awarded shall be submitted to the Competition on the prescribed form provided. Clubs failing to comply with this Rule shall be liable to be fined (in accordance with the Fines Tariff ) or dealt with as the Management Committee shall determine.

(I) The Competition shall keep a record of the markings and, on the form provided by the prescribed date each Season, shall submit a summary to The FA/County FA.

(K) Match Officials shall be supplied, each season, with a copy of the Competition Rules free of charge.

(L) Match Officials shall have undertaken a RESPECT briefing offered by The FA/County FA or the Competition.

Think of becoming a referee

FA Laws of The Game 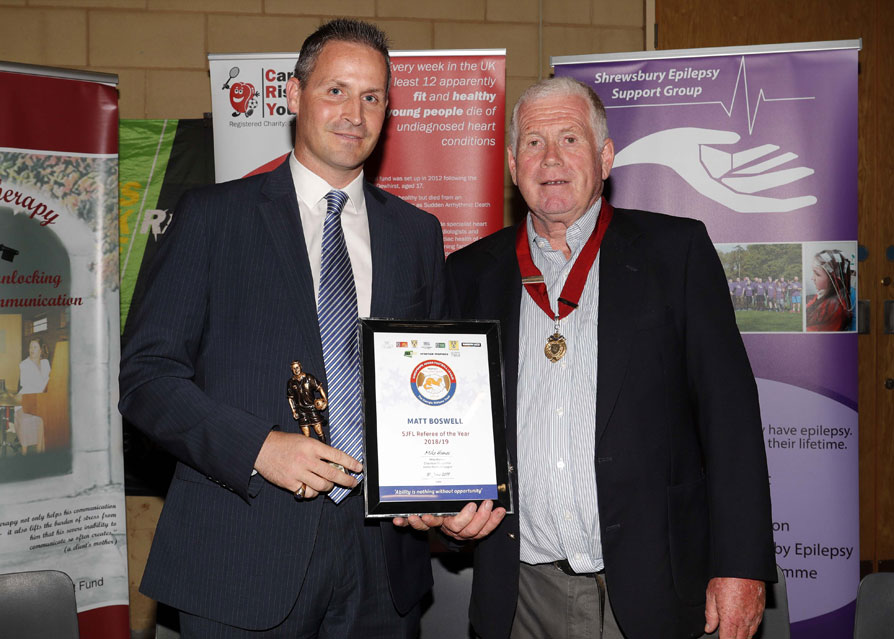 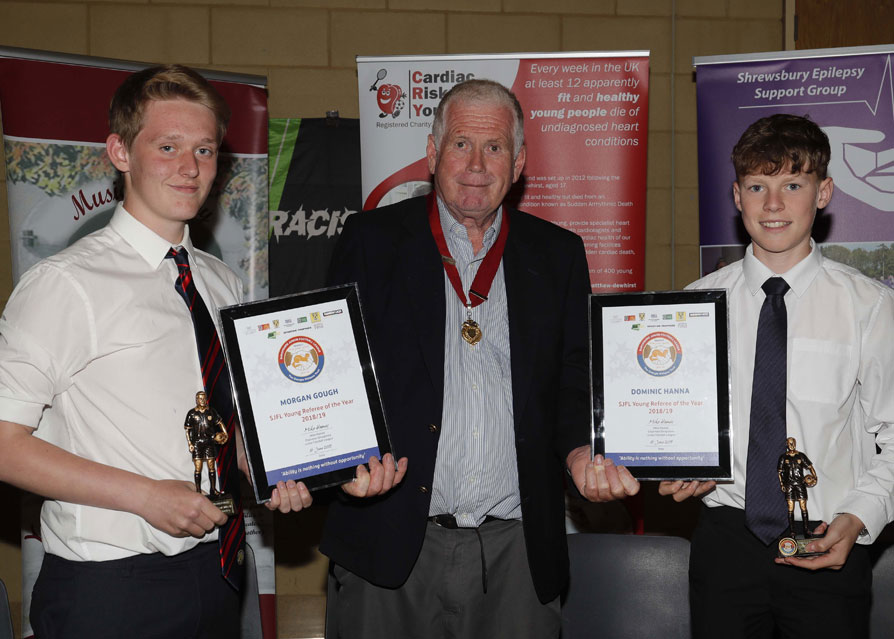 All photos courtesy of Kidz in Focus 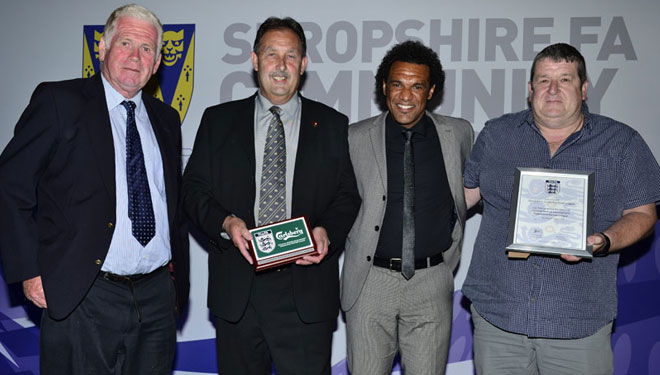 The success of The FA National Referee Development Programme (NRDP) in producing and retaining quality referees is determined by the choice of Partner Clubs and Leagues that are selected by the Shropshire FA to support the programme.

All clubs used in the programme are signed up to and actively participating in the FA Respect
Programme. These partners are aware of their responsibilities towards the development of selected referees and create an environment where potential and commitment will be encouraged to develop.

Partner Clubs are required to meet all Safeguarding requirements, follow the FA RESPECT programme, abide by the National Referee Development Programme Codes of Conduct and provide a safe and appropriate environment for match officials at all times.

Similarly National Referee Development Programme Partner Leagues are required to fulfil all of the above, as well as being an FA Charter Standard League, with allocated Referee Coaches and Mentors, and with a commitment to Independent Referee Appointments for the benefit and development of referees within the League

PARTNER LEAGUE AWARD – SHROPSHIRE JUNIOR FOOTBALL LEAGUE
The Shropshire F.A. is delighted to announce that the Shropshire Junior Football League are the County F.A’s first recipient of this award as they have demonstrated a commitment and support in the development of referees in Shropshire.

As an FA Charter Standard League, Shropshire Junior League have included Referee Development and the introduction of Independent Referees Appointments as a key priority for a number of years as part of its League Development Plan .This has seen the introduction of Independent Appointments at Under 13s and Under 16s age groups this season with further age groups to follow in the coming seasons. 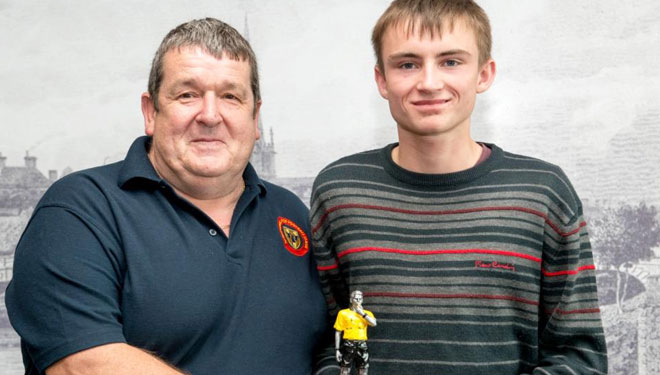 Referee of the Year –  Robert Davies
SJFL appoints match referees to all U13, U16, cup semi-finals and cup finals. Robert Davies was awarded young referee of the year though his match officialdom of the younger age groups in the league. After each game a match report is returned to the league which includes referee’s marks plus comments for his refereeing that fixture. At the end of the season the highest average scores allots the winner. Simon Walker was awarded the senior referee of the year (older age groups) but was unable to attend the presentation day.

On the photo: from (L) to (R) Nigel Harris (SJFL Referee’s Appointments Secretary). Robert Davies – Young Referee of The Year.