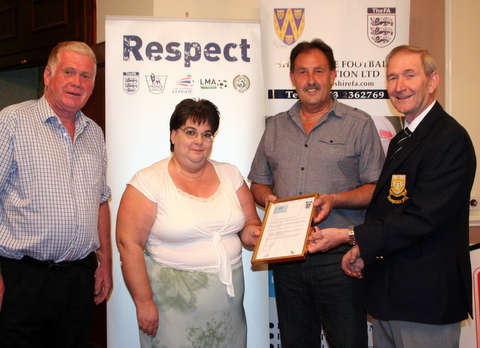 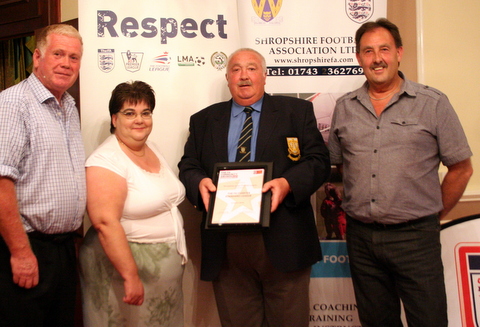 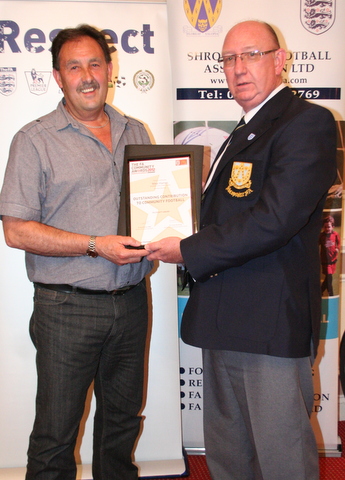 Shropshire Junior Football League (SJFL) presenting £2500 to 5 Shropshire nominated charities. This has been another exceptional year for the league’s charity fund and following on from the £3000 raised last season (2011-12) a magnificent sum of £2768 when considering the current financial constraints has been raised this year with each charity receiving £500 from the league’s charity funds. 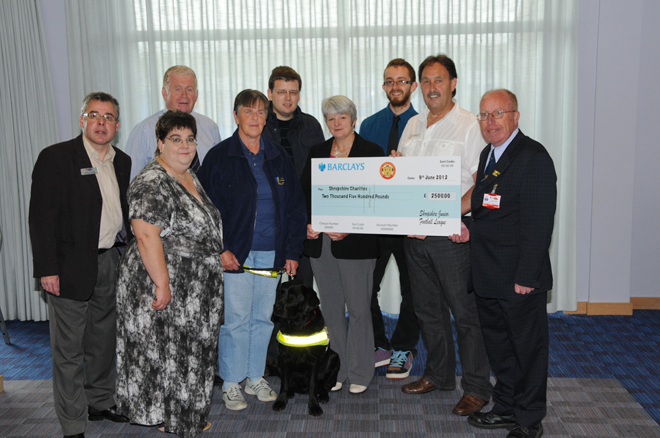 The Shropshire Junior Football League (SJFL) is very pleased to have an excellent partnership with Turner Peachey that promotes ‘Fairplay’ and ‘Respect’ in grass roots football. Turner Peachey have been the league’s main sponsors since 2006 and have willingly agreed to continue supporting the league’s work in Respect/Fairplay for a seventh consecutive season. The partnership has already reaped many awards most recently with the SJFL being awarded The Bronze accreditation by The Football Association for it’s excellent work across Shropshire and being recognised as one of the best in the County for its support of the Respect programme and the quality of the experience the league offers to participants. 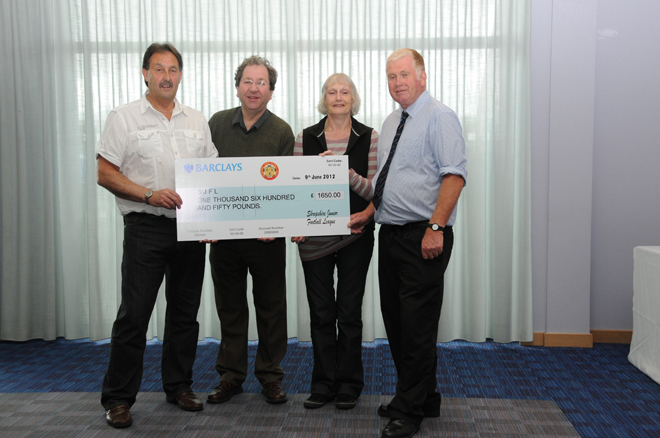 The Shropshire Junior Football League is very pleased to recognise the outstanding service to junior/youth football that Mike Hames has given to the League and County FA. Mike came into junior football in 1992, after being involved with senior football since 1976, as a manager with Up & Comers FC, in some ways to give his son and friends a game of football, little knowing he would still be involved in grass roots football 20 years later! Having served Up & Comers has team manager (U10 to U18), chairman, president and now honorary vice president Mike was elected chairman of the SJFL in 2000 and the following year onto the Shropshire FA where he became chairman of Shropshire FA Youth in 2009. He continues to serve both league and County FA and was the driving inspiration behind the SJFL being recognised by The Football Association as the first Charter Standard Football League in the country in 2009. Since then he has lead an excellent league management team to become The FA Community County and Regional award winners for the past two seasons (2010/11/12) and this year in the league achieving Bronze accreditation from the Football Association (first in the county) for the FA Respect programme. 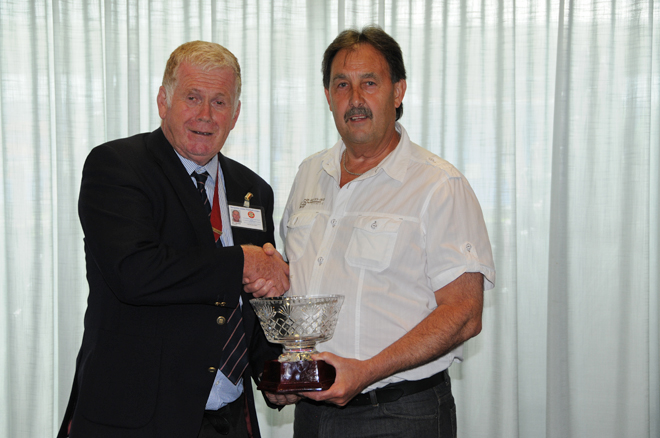 At The Shropshire Junior Football League (SJFL) Presntation Day held in June 2012 the league recognised not only the league winners but also those teams competing for the Fairplay and Respect Awards. During the season teams are marked on their sports performance in relation to The FA Respect Programme for players, managers and spectators and marked by teams they play against. Awards are made to each team as divisional winners for U8 to U16 age groups and then the top award (all sponsored by Turner Peachey) is presented to the overall best team across all age groups from the 185 teams currently in the league. This year the Turner Peachey Fairplay Award was presented to Stretton Red Rovers FC from the U15 B division. The team will now represent the SJFL in the Shropshire FA sports awards scheme which covers all affiliated teams across the county. 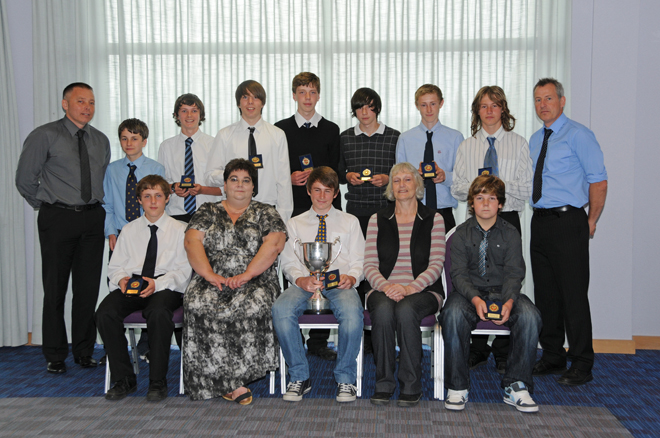 On the photo call along with the team managers and players on the front row (left to right from club captain) is Jan Butler (Secretary SJFL), club captain with the cup, then Sheila Allum from Turner Peachey (League Sponsors)

The appointment enhances a part of the reciprocal work of the SSCFA and Shropshire Junior Football League in relation to respect, conduct and fairplay of boys and girls who play junior league and/or schools football. Where young players find themselves subject to a disciplinary action this information is simultaneously shared with both organizations who then communicate the details relating to the player directly to their club and school. Players suspended by SSCFA will also automatically be suspended for the same period by SJFL and vice versa.

SSCFA is delighted to announce the appointment of Lynda Manson into the new role of Disability Officer for the Association. It is the first time anyone has held such a role for the schools movement in Shropshire and represents the Association’s commitment to creating and maintaining quality football opportunities and experiences for the children of Shropshire.

Lynda is well known, especially in the Telford area, for her excellent work as School Sports Coordinator for the Special Schools in the area and already does a fantastic job of driving football within these schools. There is more football taking place in Shropshire Schools for students with disabilities (encompassing a vast range of needs) than people realise and much of that is down to Lynda and her passion for providing positive opportunities for the students with whom she works. Her appointment to SSCFA will facilitate a more coordinated approach to disability football within our county schools and will provide Lynda and the staff of these schools with the support and administration they need to deliver increased opportunities over the coming seasons. 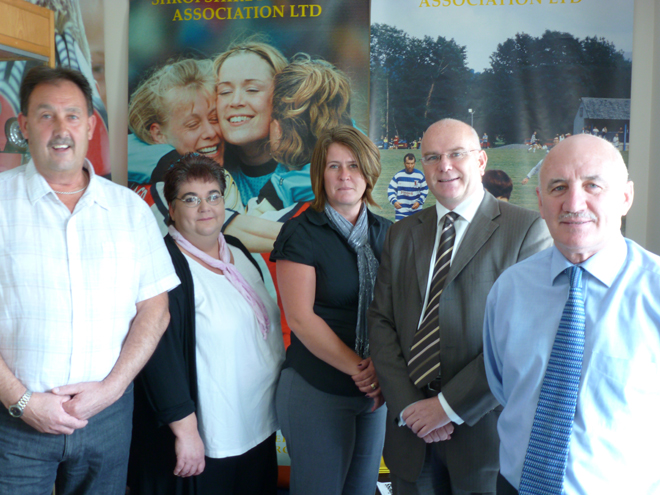 Long Service Awards recognised by Shropshire Football Association to two members of Shropshire Junior Football League (SJFL). The photo call was made at the Shrewsbury Sports Village and are as follows: 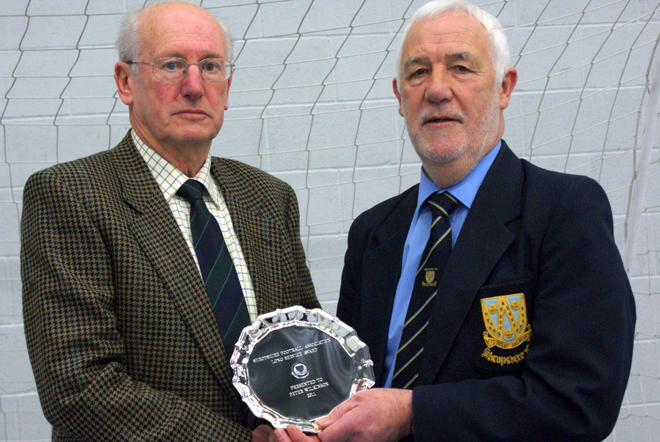 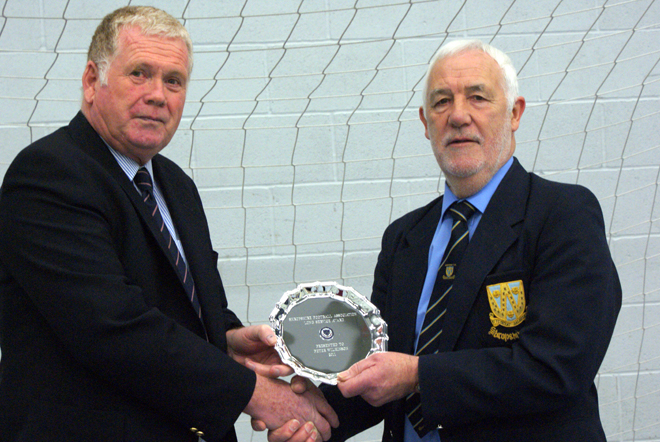 The was the forth Futsal Festival sponsored by SJFL/Shropshire FA and follows the excellent games from previous years. 38 teams (over 400 participants) at U8, U9, and U10 enjoyed a very successful football festival at Shrewsbury Sports Village. The festival, which provides an essential mid-winter break for the mini soccer teams, is also an important part of player development and The League is already in consultation with Shrewsbury Sports Village (who have confirmed their commitment to this tournament), sponsors and FA Development Office to promote a fifth Futsal Tournament next winter (2013). 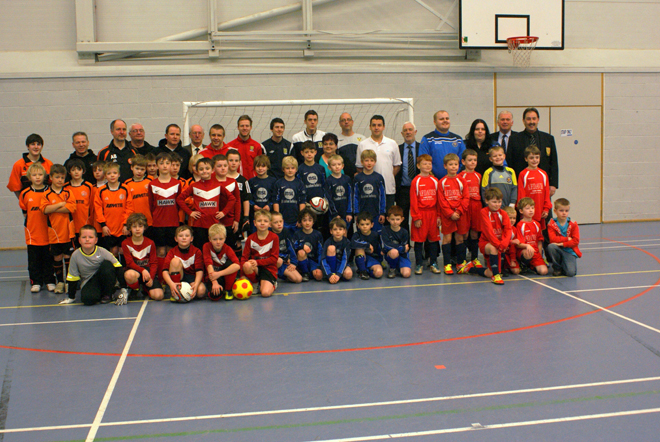 The photo call taken on the last day of the winter Futsal programme (26 Feb 2012) shows a snapshot of teams from Shrewsbury Juniors, Baschurch Juniors, Prees Lions and Up & Comers Eagles along with league officials, referees, FA officials and team managers