NB: Please be aware that the Shrewsbury 10k will be taking place on 17/03 and there will be road closures. This will probably affect morning fixtures, so please check the route to your venue and allow a little longer than normal to arrive.

A match programme for U10s, U11s and U12s will take place at each venue with places to play for in the SJFL Festival of finals (U10s) and the semi-finals for U11 & U12s .   SJFL will provide grant aid to each Host club venue to support facility and match officials costs (part of the National Referee Development Programme Partner League). Host clubs will appoint match officials for their respective festivals as part of the SJFL’s CS Referee Development Programme.

The FA and Shropshire FA acknowledge that the National Referee Development Programme League (awarded to SJFL) will be unable to retain or develop match officials without the support of their network of Partner Leagues and Clubs. They also acknowledge that the retention and development of referees is not only a success for the programme but also to those Partner Clubs and Leagues who support it.

The SJFL Futsal Respect Festival will be in its eleventh year and again hosted by Shrewsbury Sports Village (part of the Community Football Partnership). The Futsal festival will run every Sunday through January, February and into March 2019 (U7-U10s) and Weds/Friday evenings for U12-U14s. Last year 86  teams entered and over 800 participants enjoyed the event making it the best ever SJFL Futsal event organised by any the league. Can we do better this year? YES we can as over 90 teams have entered!!

All four venues were well supported and a selection of team and group photo calls below shows the excellent coverage by the host clubs to promote the festivals. The Charity Cup Trophy Semi-finals to be played on 2nd April will be competed as follows: 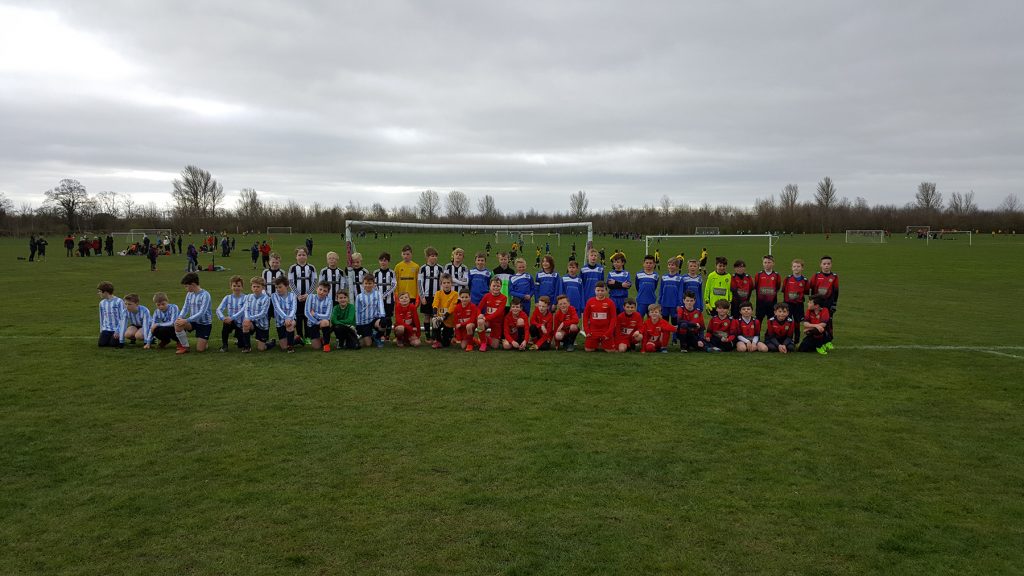 The Georgia Williams Trust – Respect Team Of The Year 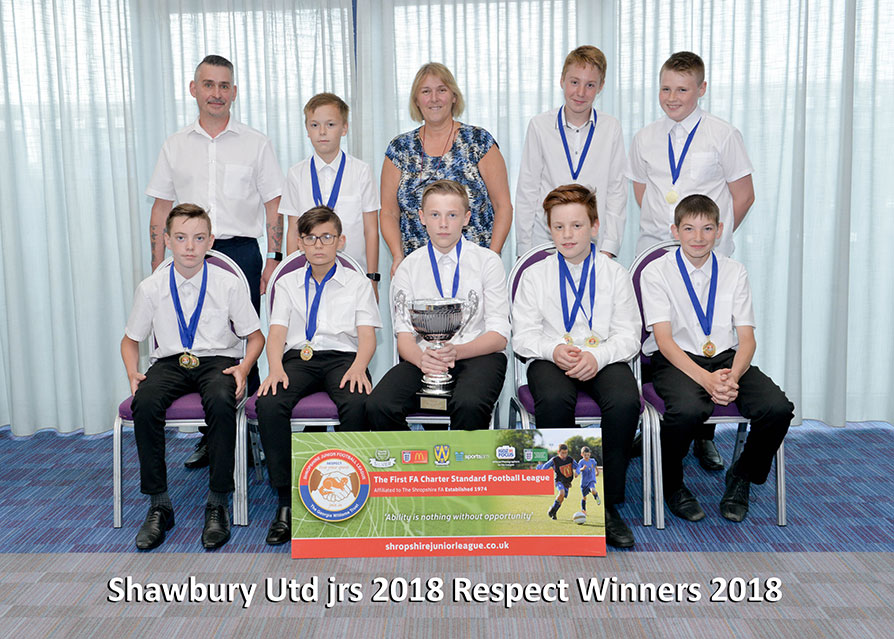 Shawbury Utd U13
Awarded to Shawbury Utd U13 and judged through the respect match report marks collected through Full-Time over the season.  This team consistently topped the match day respect marks across team performance, players respect and those of the coaches and supporters and now receives the top accolade as the league’s overall GWT League Winners. The League’s Respect awards are sponsored and presented by The Georgia Williams Trust. 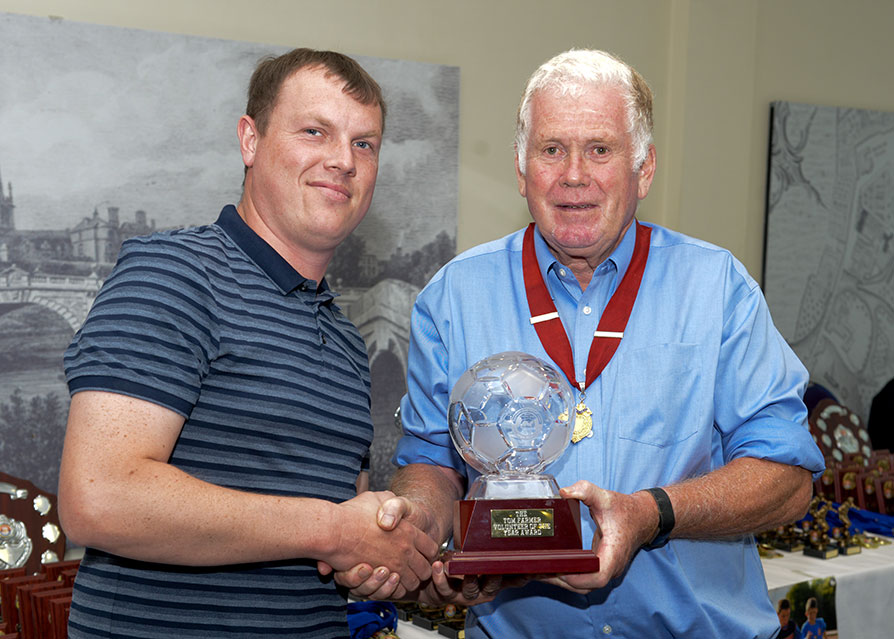 Adam Reid
The SJFL ‘Tom Farmer’ Volunteer of the year is presented to Adam Reid for his outstanding commitment to junior football.  This is only the second year this award has been made (since gifted to the SJFL by the family of the late Tom Farmer – former Chairman and President of Shropshire FA). Tom Farmer was a great supporter and advocate of youth football and this award recognises those achievements. Adam Reid has been recognised for his outstanding service to community football following is inaugural year as a newly qualified referee in affiliated youth football especially with the SJFL Futsal Respect Festival, which runs for 9 weeks through the winter break. Adam not only refereed every week at the event but was always willing to help/support in anyway he could to make the games more enjoyable to all participants. The league  received numerous positive comments from parents, coaches, and teams about the positive way in which Adam not only  referees but also willing and supportive to football initiatives that bring community benefits to the league. 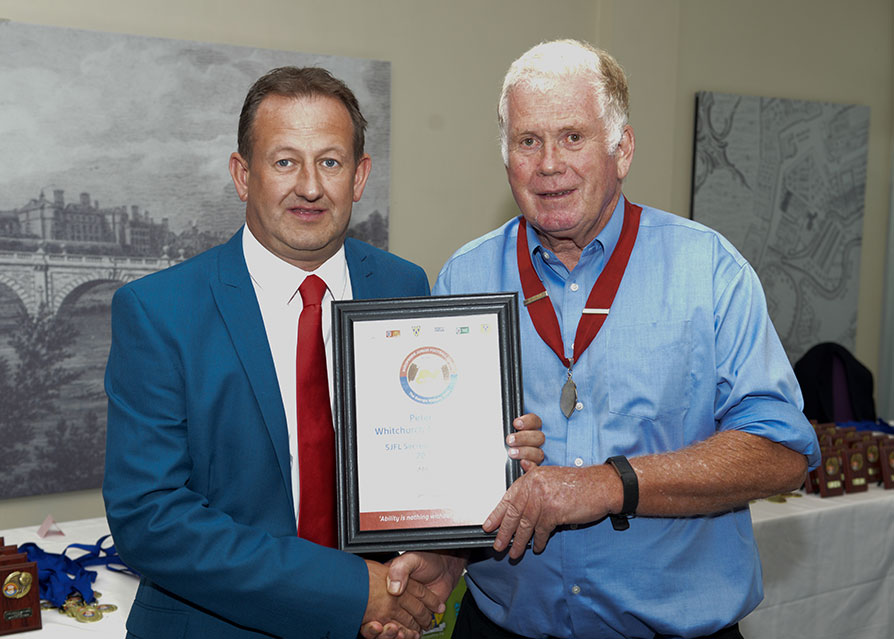 Peter Tew – Whitchurch Alport Juniors
Peter took over  in mid-season as  Secretary of Whitchurch Alport Jnuiors FC  (when the club was having some difficult times) and did  a fantastic job running the club  and ensuring each player across the nine  age group teams  had the best opportunity to play and enjoy football.. He dedicated endless  amount of his own time into administrating the club and his commitment to the club is outstanding and the hard work he put in  shined through in the club’s performances. 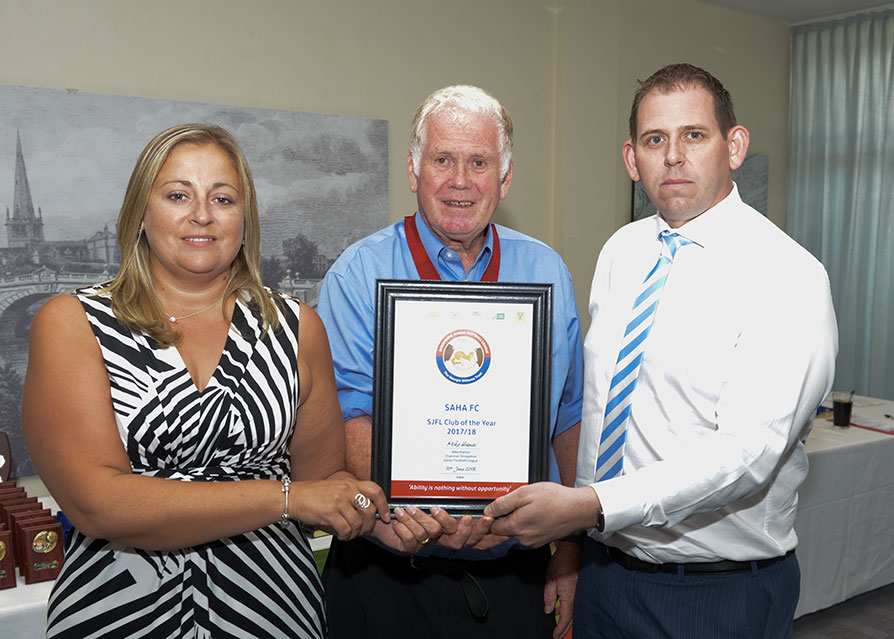 SAHA F.C
SAHA are one of our largest clubs in the Shropshire Juniors Football League with 26 teams from U8 to U16. The Club encourages volunteers with help by funding Referee & Coaching courses whilst ensuring they meet the Charter Standard Criteria. The club has strong links to the local community (work closely with Shelton Cricket Club) offering different sporting opportunities alongside football helping to raise the profile of the club and showcasing their good work in Shropshire and beyond. The club have formed good links with Shrewsbury Town in the Community, which has enabled them to offer bespoke coaching to members of the club during school holiday’s. 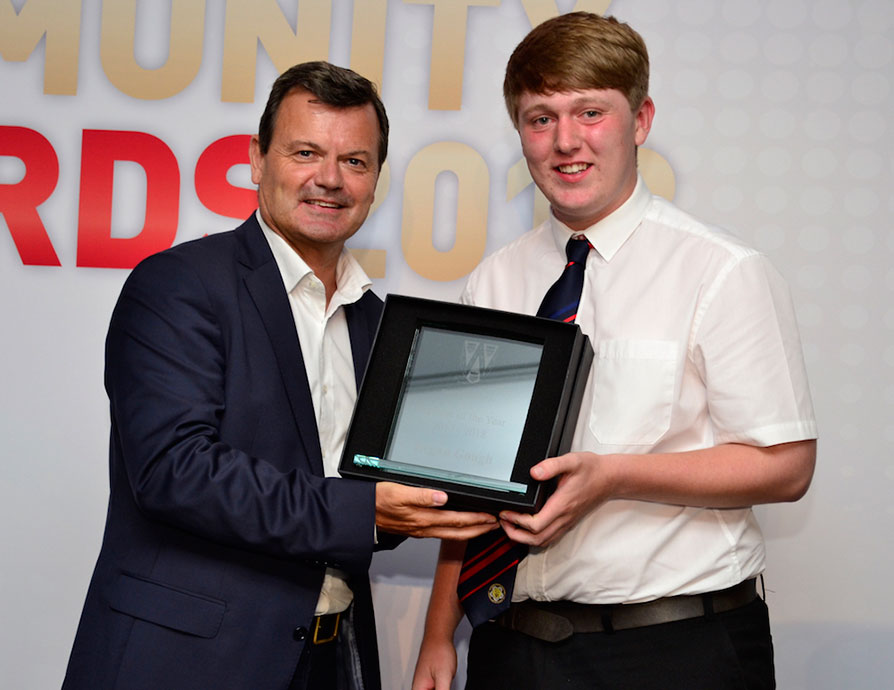 Awarded to Regan Gough
Regan has gone from strength to strength this season. He referees in the Shropshire Junior Football League, Shropshire Girl’s and Women’s Football League, Central Warwickshire Girl’s League, Shropshire Schools Association and even managed to run the line in the Shropshire County Premier League, all this with him only being 16 . He has had the responsibility of many finals and is highly thought of amongst league committees and his referee mentors. During May he has officiated nearly every day. Regan wants to learn and will always listen to advise, his plans are to consolidate his level next season but be more involved in the County Premier League, Running the line before applying for promotion. Regan wants to become a professional referee and thoroughly enjoys his role, coupled with his FA Youth Council role he is a fine example of a young man to those he helps and supports. 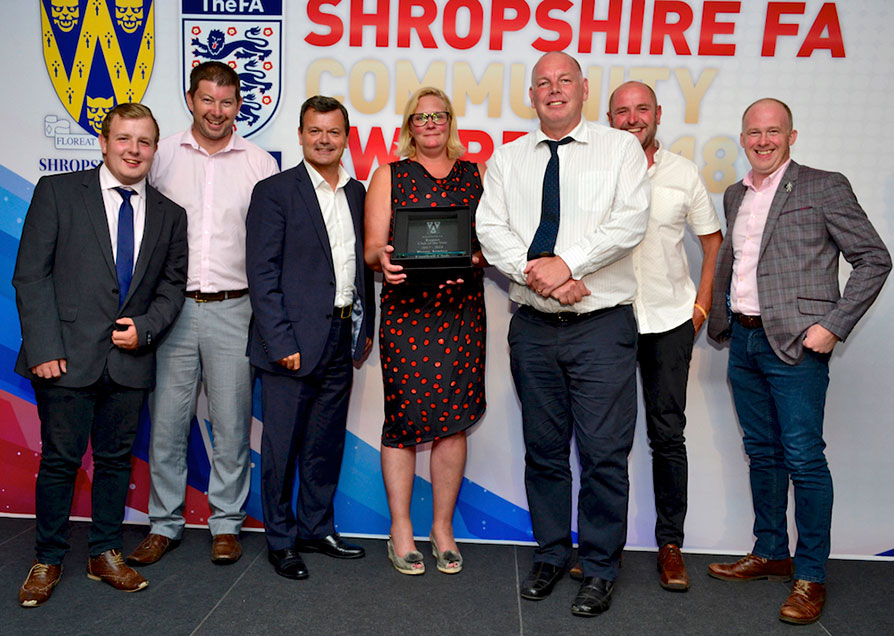 Awarded to Prees Juniors Football Club
Recognised for stressing the importance of team spirit, integrity, fairness and enjoyment above an over-arching desire to win at all costs. Prees Juniors have actively supported players and coaches in embedding the values of Respect in everything that they do. Holding respect at the core of the club, it is evident to see the impact both in terms of football opportunities and engagement with the local community. Press Junior were also recognised as Joint winners of the prestigious FA Community Club  Award, shared with Shrewsbury Juniors FC,  for their excellent work in providing community football for up to 300 boys and girls. 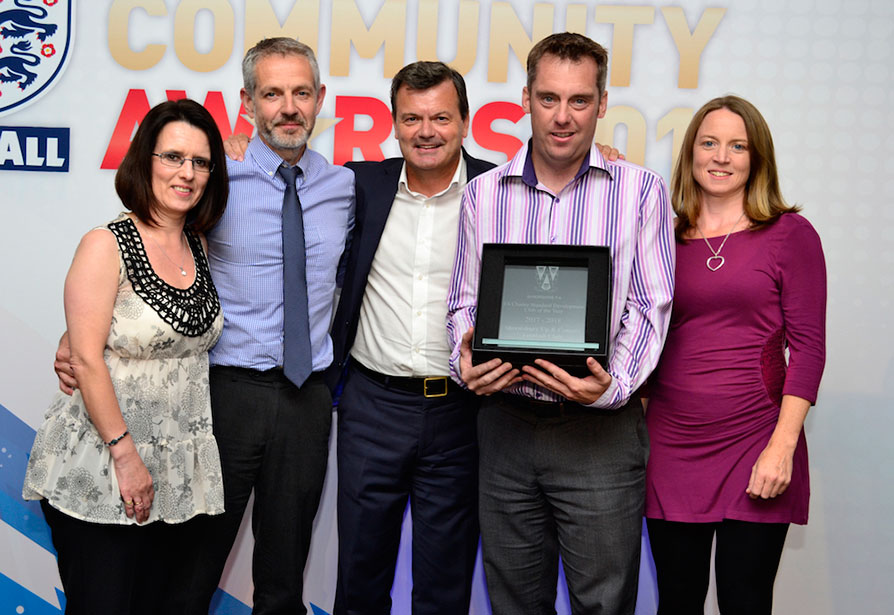 Awarded to Shrewsbury Up and Comers FC
The club is committed to the development of young players and has an all-inclusive policy which enables any child to play regardless of their ability. A very well run  Football Club that encourages (through its coaches) for players to enjoy playing the game as a club philosophy. Player development is a fundamental element for the club who also endorse equal playing time. Maintaining a high standard of coaching whilst continuously pushing towards the next challenge. Shrewsbury Up & Comers has been quoted as a “Vibrant refreshing club full of energy”. The Chairman brings all the teams together in a structured manner and this is indicated by the respective Teams Managers and Assistants. quote” my son enjoys his football before, during and after the training and games and this is a pleasure to see not just for my Son but the rest of the team. This is a well-deserved award for such a great and friendly club”. 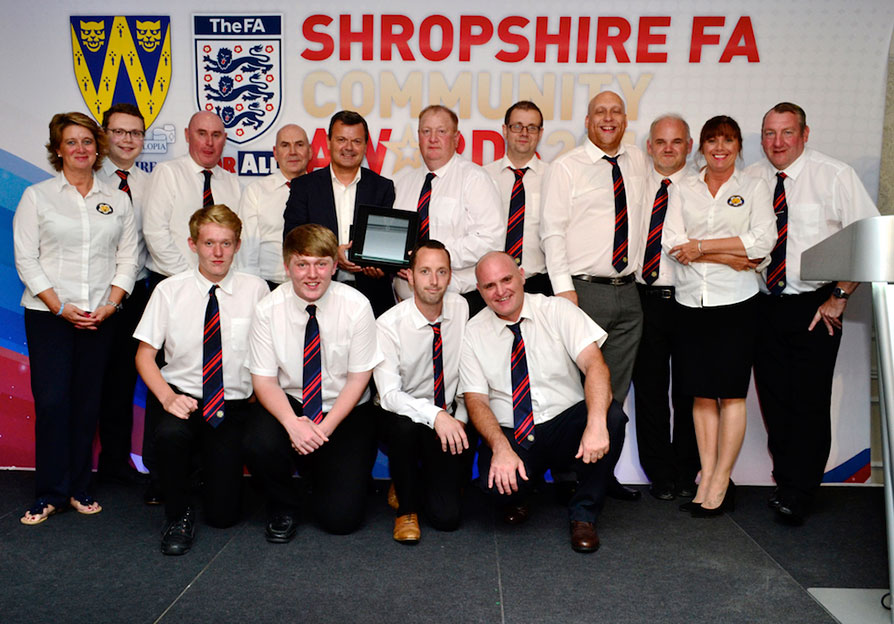 Shrewsbury Juniors is a club that people are proud to be a part of. Currently showcasing 27 teams ranging from crèche age to adults, including both boys and girls teams and affiliate to 5 different leagues. The Club annually hosts a huge tournament which is extremely successful with 132 teams taking part this year (from as far away as London).  The Club endorse and support the respect campaign and continue to support young people in both JFL courses and Refereeing. We support numerous charities and hold fundraising evenings for these.

Our current fundraising project aim is to offer CRY (Cardiac Risk in the Young) testing to all eligible aged players within our club. Shrewsbury Juniors prides itself on delivering safe and friendly football for all but more importantly our role in the community. This year the club raised money for The Shropshire Air Ambulance & The Isaac Jones Trust (a local children’s cancer charity) as well as donating a great sum to the Shropshire Junior Football League charity fund. 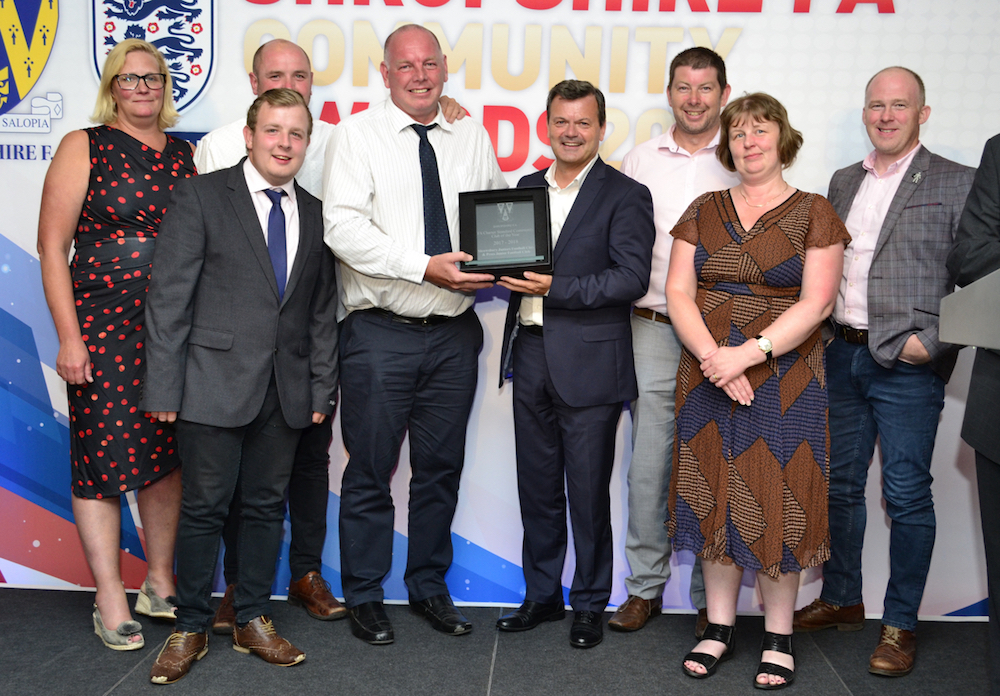 A club with close to 300 boys and girls playing football in Shropshire.   All coaches have a minimum Level.1 Football Coaching Badge and the club holds in-house Referees courses for their young volunteers, Safeguarding and First Aid Course for parents and coaches.   Prees Juniors are an Inclusive Football Club where everyone is welcome to train and play for the club no matter ability. The club hosts an annual tournament which is attended by clubs from Shropshire and the wider area and their Girls Tournament raised close to £3000 in the last two years for local charities. The club is proud of its great facilities, including floodlit grass pitch and 3G pitches and  to be a Sister Club to Man City Ladies FC 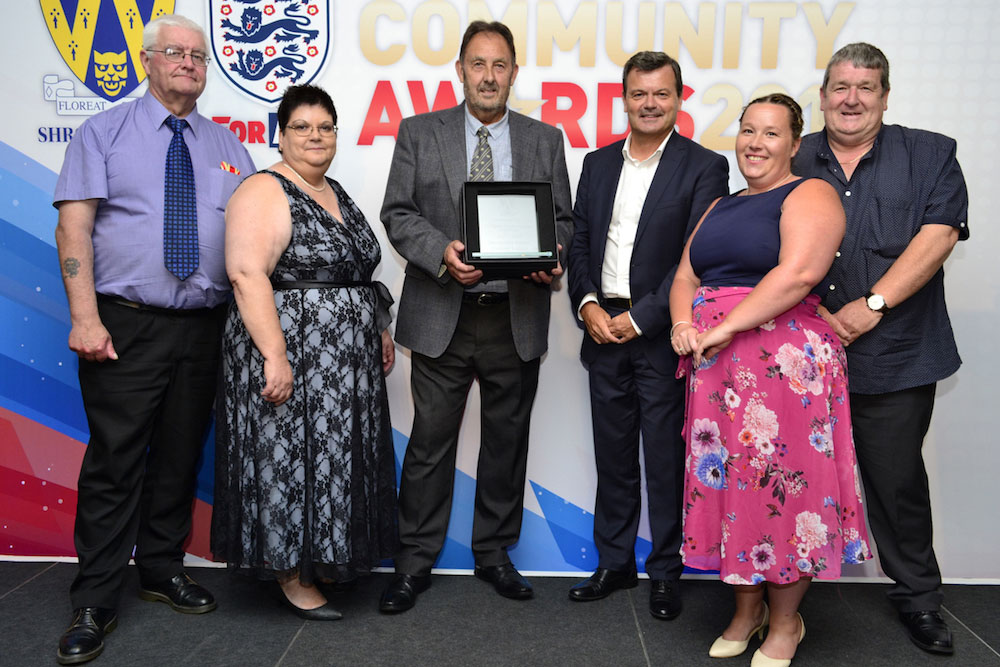 SJFL Continues to provide the best opportunity for young people to play and enjoy football across the county and is the First county league to be awarded (for the eighth consecutive year) the McDonalds FA Community CS League award for Shropshire 2018 and the Regional West Midlands 2017 (a fifth award) https://shropshirejuniorleague.co.uk//fa-charter-standard-league-of-the-year-and-regional-cs-league-of-the-year-2017/

The League provided a tenth consecutive Respect Futsal Festival through January to March https://shropshirejuniorleague.co.uk//futsal/ for 74 teams/144 fixtures over 700 players on Sundays (U7-U10) and with a second FA Futsal grant delivered Futsal to older age groups U11 & U12s (12 teams) with midweek fixtures – 78 fixtures over 120 players and finals participated within the CS league’s player development programme. The league also sponsored Futsal coach education and Futsal referee’s courses and delivered Kick It Out campaign at Futsal Respect festival

FA Silver Respect Accreditation in 2013 (reaccredited in 2015) and being the ‘first’ FA CS League (2009), SJFL continues to adapt/different formats of the game irrespective of ability, gender, ethnic origin and have collective responsibility to create a fair/safe/enjoyable environment in which the game takes place. SJFL is committed to inclusivity/eliminating all forms of discrimination and was awarded Runners up in Best Inclusive Project 2017 for Kick It Out.
https://shropshirejuniorleague.co.uk//best-inclusive-project-of-the-year-2017-runners-up/

SJFL was the First county league to have a Respect partner and to include the two parties within a new league logo/badge. ‘Respect’ partnership with Georgia Williams Trust https://shropshirejuniorleague.co.uk//futsal-gwt-respect-partnership%e2%80%8f/ that promotes respect not just in football but also the wider community. The trust is our partner for the league’s Respect Awards and team winners receive their awards at Shrewsbury Town FC – part of Community Trust Partnerships. SJFL has its HQ in ‘The Hub’ in partnership with STITC who support match-day respect and reward the league’s monthly winning respect team with match-day vouchers for home games at STFC. SJFL promotes their summer cup and The STFC’s RTC Girls U12 team completed a second season in the SJFL within the FA Development Pathway for girl’s football.

SJFL is the first county league to become a partner on the Shropshire County Council ‘Hate Crime’ Commission – Kick It Out Shropshire Working Group – objective Kick It Out not just in football but across all sports. Also, the First league to fully Implement Respect Marshalls and to welcome the National FA CS/Respect Manager (Tom Lee) to open league forum on Respect, and is proud to be the First ever junior football league to receive a Mayor of Shrewsbury’s Awards – Gold award to SJFL in recognition of their achievements towards enhancing the wellbeing of young people in the area https://shropshirejuniorleague.co.uk//mayor-shrewsbury-youth-award/

SJFL continues to support the valid work of young volunteers and was the First county league to co-opt a member of Shropshire FA Youth Council onto league office. The Youth Council were key partners in delivering Kick It Out campaign at Futsal Respect festival (2017) leading to the Best Inclusive project runner -up award (2017).