2021/2022 has again been a challenging season with the Covid-19 pandemic still affecting community grassroots football and many local communities.

It was not until April 2021 that outdoor grassroots football was allowed to restart that the league decided to concentrate on a Charity Cup Festival competition to end the 2020/21 season. With absolute support from Market Drayton Town FC, Shrewsbury Town In The Community (Ludlow Stadium) and The New Saints FC who all agreed to support the league and host a festival of finals, to help local charities, and a staggering total of £3022 was raised for the foodbanks at Shrewsbury and Oswestry and Mental Illness/bereavement counselling (PRISM) in young people – read the full story.

Now came the new challenge, could the league replicate the 2021 achievements (supporting local charities) in 2022 but also complete a full match programme for the competition (unlike the null and void league fixtures in 2021)? The first charity appeal that went out was for Christmas 2021 – ‘SJFL Christmas Toy Donation Appeal for Children In Hospital Over Christmas and to Help Struggling Families’ – £700 and toys were donated by member clubs – read the full story.

Whilst the 2021/22 season has been disrupted due to Covid-19, age groups U10 – U16 have actively been playing league/development fixtures and cup/trophy games for the Charity Cup competition and again Market Drayton Town FC, STITC (Ludlow) and TNS FC offered their support to host the finals [unfortunately the finals at Park Hall (TNS FC) have had to be moved as their pitch is being relaid – but MDT FC kindly offered to cover the U15 -U16s finals ]. The U7 – U10s have been playing development fixtures and also Futsal 2022 and during the February Half-Term, SJFL sponsored ‘Futsal For All – Disability Futsal Festival’ with over 50 participants taking part – read the full story.

Shropshire Junior Football League would like to give a special thank you to Market Drayton Town FC for hosting the last round of three SJFL 2022 Charity Cup Festival of Finals at their Greenfields Stadium on 15th May. These finals were originally scheduled to be played at The New Saints FC, Park Hall Stadium but with their pitch being relaid MDT FC offered their ground without any second thoughts. This is the sixth season of the league’s partnership with the senior club and will see Greenfields Stadium being an excellent setting to close the season for the 2022 SJFL U15 and U16s Charity Cup Finals. SJFL is pleased that MDT FC continues to support junior grassroots and community football.

At today’s finals SJFL are sponsoring Derwen College and supporting the FA Heads Up Campaign. The league pledged £250 plus gate receipts (excl. expenses) and a grand total of £452 was raised with a cheque presented to the charity on behalf of SJFL and partners to help continue the excellent work of this charity. We thank all supporters for your charitable donations made today.

Please read more about the work at Derwem College here

The league was also very pleased to welcome Sue Healey, as a special guest to the finals, and to present the inaugural Bill Healey. Memorial Cup. The Bill Healey Memorial Cup has been been donated to the league by his family and is in recognition of Bill’s commitment and support of junior grassroots football. Sadly Bill passed away in October 2021 but he will be remembered for his services as an officer of SJFL. He served as Player Registration Secretary for many seasons and was a founder member of Gobowen Youth Football Club. The league is honoured to receive the trophy which will be played for each year in the SJFL Charity Cup competition.

U15 Charity Cup winners – Shrewsbury Up and Comers Hawks

SJFL also thank the Georgia Williams Trust, as the league’s Respect partners, who presented the medals and trophies to the U15 Charity Cup and U16 Consolation Charity Cup winners and finalist and respective ‘Player of The Finals’ awards.

Ludlow Stadium (STITC) was the setting of the next round of the SJFL 2022 Charity Cup Festival of Finals held on 8th May with Empathy For Special Children, being the sponsored charity for these finals. The league was pleased to welcome charity guests, Sam and Liv, who helped with the medal presentations for the two U13 Charity Cup finals. The league pledged £250 plus the gate receipts (excl. expenses) and a grand total of £604 was raised with a cheque presented to Sam to help continue the excellent work of this charity – read more about the charity.

The league extends many thanks to the match officials at the finals Matty Jones, Dominic Whittingham, Jason Keeley, Adam Reid, Sam Breeze and Kev Breeze.

Julie Robinson
Thanks for all the hard work and organisation that went into putting this event on. Many thanks to all the officials on the day, it was a great experience for all who took part and finally a fabulous amount raised for charity. Well done all – Shrewsbury Juniors U13 Lions.

Dean Langford
Well Done to Everyone InvolvedGreat day Thanks to League and Refs for their efforts and hospitality – Dean, U14 SAHA Storm.

The first of the SJFL 2022 Charity Cup Festival of Finals was held at Market Drayton Town FC on 24th April. The league pledged £250 plus the gate receipts (excl. expenses) to The Harry Johnson Trust, being the sponsored charity for these finals. The league was pleased to welcome the charity guest, Sally Johnson, who helped with the medal presentations for the U10 Charity Cup finals and a grand total of £662 was raised with a cheque presented to Sally to help continue the excellent work of this charity – read more about the charity at a successful season is so far unfolding.

Download your copy of the match programme for the SJFL Charity Cup Festival of Finals 2022 (U10.U11 & U12s) here 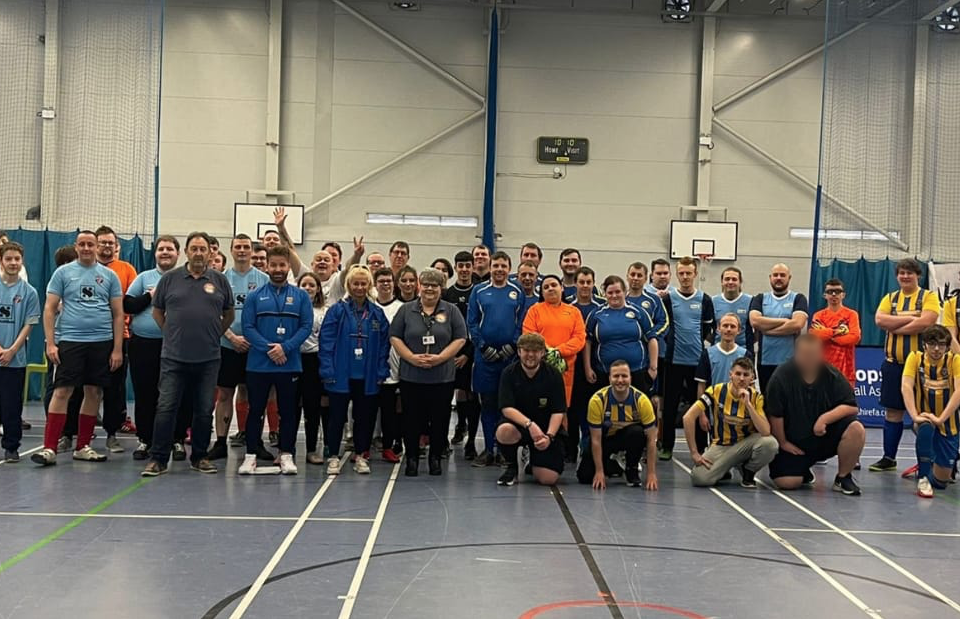