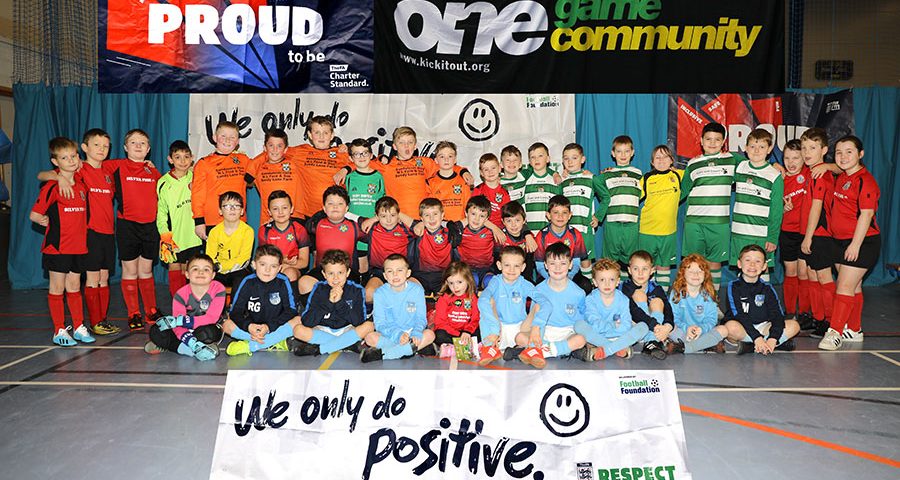 Given the dreadful storms (Ciara and Dennis) in February cancelling all SJFL league fixtures and Futsal over a week-end and then Coronavirus closing down all grassroots football from 23rd March,  SJFL  has been most fortunate in being able to complete its twelfth consecutive Futsal in 2020 following the inaugural event in 2009.   Again this year the Futsal Respect Festival included  WE ONLY DO POSITIVE – KICK IT OUT event on 23rd February – read more on KIO here.

On Sundays, Futsal was dedicated to mini-soccer teams in the U7 to U10 development age groups and 61 teams enjoyed a full match programme of 16 fixtures each Sunday.  This consisted of 32 teams and over 250 players participating each week from 9am to 5pm  over the  nine weeks of the festival which was held at Shrewsbury Sports Village.

A cumulative total of  288 (U7 to U10) teams and 2250 participants competed in the fixture programme over the nine weeks of the  Futsal Respect Festival –  that’s an amazing achievement!

For a second year a Mid-Week Futsal programme was organised at Shrewsbury Sports Village for U11 and U13 teams enabled by the league receiving a  FA Grant to ‘Grow The Game’  at  Futsal.  The fixture programme had  8x U11 teams  and 6x U13 teams competing in trophy events on Wednesday and Friday evenings between 6pm and 8pm.  Although only two hour evening slots, each week 8x teams and over 60 players competed in the Futsal Trophy festival and over the nine weeks a cumulative total of 72 teams and 540 players enjoyed playing  futsal.

The SJFL is very proud to be the leading provider of Futsal across the county and wider football regions.  Since 2009 the league has provided Futsal as part of player development within the league’s  FA CS Plan and, having recived a FA Futsal Grant, to ‘Grow The Game’, the league was able to offer free entry fees to U7 teams, discounted fees to U8s and maintain  team entry fees for U9 upwards at the same level as previous year.

All photos are courtesy of Kidz in Focus.

The SJFL Futsal Respect Festival is now in its twelfth consecutive year and again hosted by Shrewsbury Sports Village (part of the Community Football Partnership). The Futsal festival will run every Sunday through January (except 12th Jan), February and into March 2020 (U7-U10s) and Weds/Friday evenings for U11-U14s. Last year 95  teams and over 800 participants enjoyed the event making it the most successful  SJFL Futsal event organised by any county and regional league. Lets see if we can do better this year?

The latest Futsal fixtures can be downloaded below:

All SJFL Futsal 2020 fixtures will be posted on FA Full-Time. KICK IT OUT and WE ONLY DO POSITIVE will take place on Sunday 23rd February with presentations by SJFL, SFA Youth Council and Georgia Williams Trust supported by Shropshire FA.