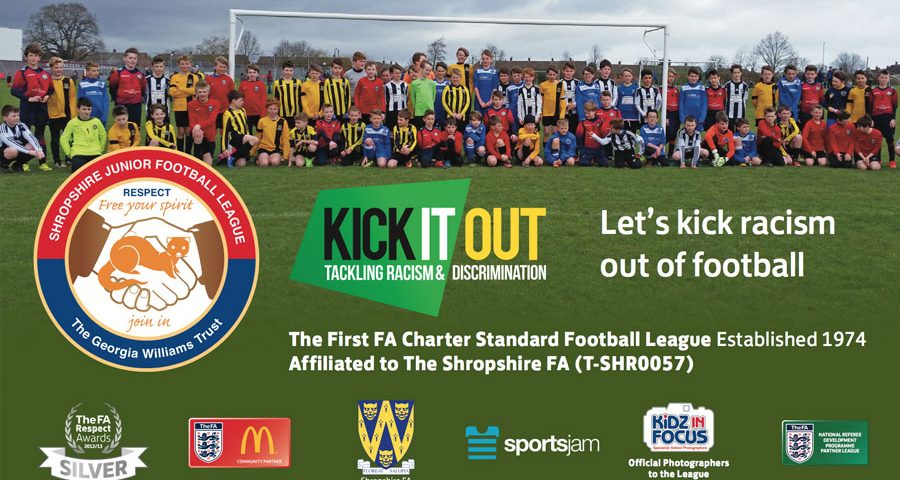 Now in its tenth year and again hosted by Shrewsbury Sports Village the SJFL Futsal Respect Festival 2018 has run every Sunday through January, and February and will end in early March 2018. With 74 teams entered from U7/crèche, U8, U9 & U10s, over 700 participants and a programme of 144 fixtures this is the leading Futsal event organised in Shropshire (and the wider region) by any other league! PLUS - New this year, following a further FA Futsal Grant, SJFL has also been running a mid-week Futsal Festival match programme of over 70 fixtures with 12 teams from U11/U12 age groups on Wednesday and Friday evenings at The Sports Village attracting over 100 players. The Futsal Festival opened on 7th Jan with an introduction to Futsal and football for U7/crèche teams and the day saw 10 teams participating across a 20 game match programme with up to 100 players participating in the event.

Futsal and Kick It Out (Lets kick racism out of football):


An integral part of the SJFL Futsal Respect Festival is a day given to 'Kick It Out' the FA Campaign to help eradicate racism from football - and every day life. The following is an extract from the league's KIO day held in mid February and to our partners who willingly support the aign.

The below photo calls (courtesy of Kidz in Focus - Official Photographers to SJFL) show a brief of the recent Kick It Out Campaign Day held at the Shrewsbury Sports Village as part of the Shropshire Junior Football League's Futsal Respect Festival, in partnership with the Georgia Williams Trust, Shropshire FA Youth Council, Shropshire Football Association and Sportsjam. A great opportunity to raise awareness of the Kick It Out campaign and it was a fantastic success with well over 100 players, managers / coaches and supporters having short presentations/talks by representatives from the SFA Youth Council about the Kick It Out before their Futsal matches. Players and supporters received badges, arm bands, wrist bands KIO promotion material as a reminder of the day and the importance of Kick It Out. Please read the testimonials below in support of Kick It Out and for more information on Kick It Out please follow the attached link www.kickitout.org

Kick It Out is an extremely important campaigning organisation within the FA in eradicating racism from football. Football is such a universal game where a lot of people connect and by reaching so many people it’s appropriate to try and send out good messages through that medium. Racism is something we have to rise above and change - we need to talk about it more. Everyone should be treated equally - regardless of race, gender, sexuality, views or looks. Everyone deserves the right to be themselves and express their opinions on what they think on different matters. What racism or any sort of discrimination comes down to is ignorance. It’s lack of knowledge. The more knowledge and life experience we accumulate, the more tolerant we become where we can see people for who they are, what they are, and how they have become to be the way they are. Just because someone is racist doesn’t necessarily mean they are a bad person, it means they lack the knowledge and that’s why campaigning organisations like Kick It Out are so important. Education starts at home, in schools, junior football leagues/clubs and everywhere around us so we need to be teaching young people that everyone is equal and work together to eradicate racism and discrimination altogether - not just in football but everyday life.

The Kick it Out Campaign aims to deliver the message of inclusion and anti–discrimination within the football, educational and community sectors encouraging inclusive practiced and work for positive change.

The Georgia Williams Trust is honoured to be the Respect Partners with the Shropshire Junior Football League as we also promote respect in our Trust – not just in sports, but in everyday life. The Trust aims to help children reach their goals in life and looks at ways to get as many children involved as possible, and perhaps achieve something they didn’t think possible. Racism is a lack of knowledge and respect for each other and that’s why campaigning organisations like Kick It Out are so important. We are pleased to be the SJFL respect partners and support all the league's Respect campaigns especially 'Kick It Out' as everyone should be treated as equal and by working together we can eradicate racism and discrimination.

For more info on the Georgia Williams Trust please follow the link www.thegeorgiawilliamstrust.org

Kidz in Focus has been working with the SJFL since 2009/10 season and is pleased to be the league's official photographers and supporter especially with Respect. Football is such a universal game that reaches so many people and it’s important to try and send out good messages through that medium. Racism is something we have to rise above and change. KIO is an important FA campaign and the junior league is taking a lead on this campaign across the county.

For more information on Kidz in Focus please follow the link www.kidzinfocus.co.uk

Sportsjam, is pleased to support such an important event as the Shropshire Junior League's Kick it Out Campaign that helps raise awareness to racism within Football. It's very sad to know that racism still goes on in everyday life. We'd hate to live in the fear that every time a player stepped out onto the football field they hear slurs or negative comments - that behaviour is unacceptable, ruins the game and fundamentally hurts people. We are pleased to support the league's campaign Kick It Out and hopefully by working together we can help eradicate racism and discrimination from football.

The three photo calls below (all courtesy of Kidz in Focus) give a snap shot of the SJFL 2018 KIO event: 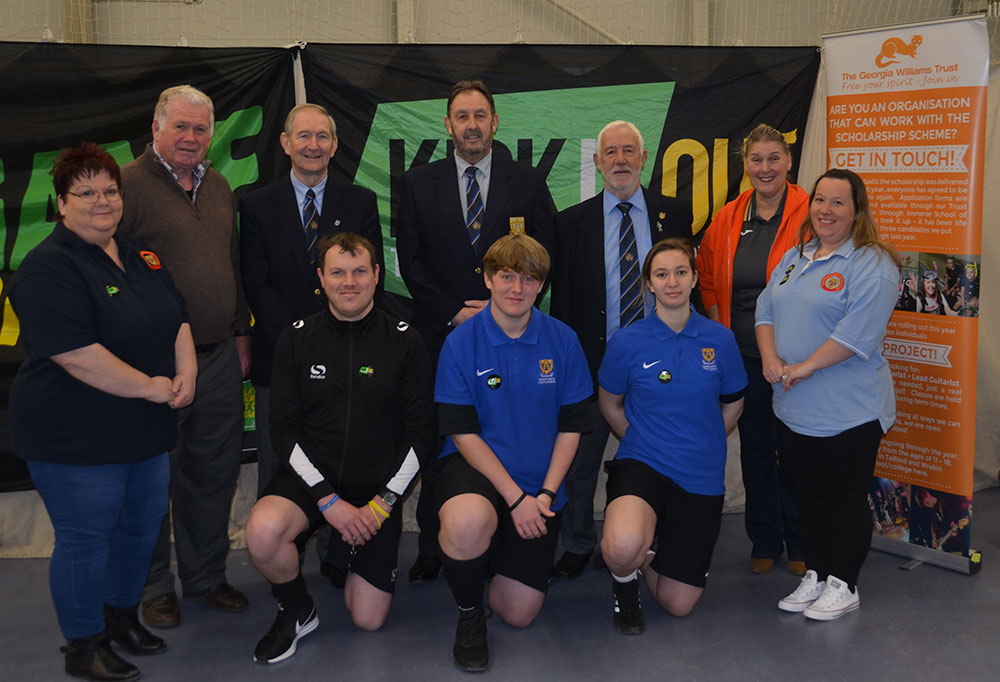 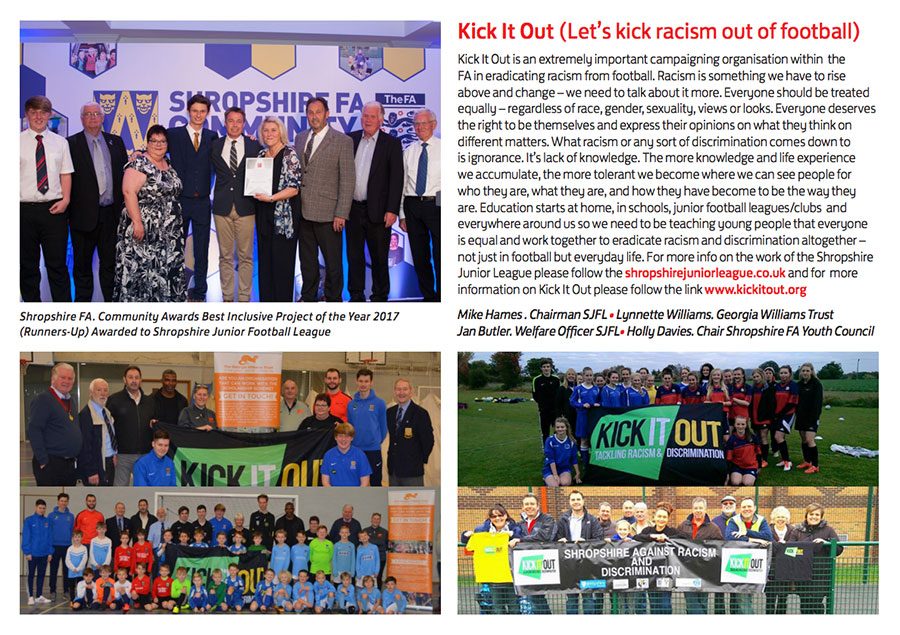 SJFL KIO flyers (printed by ROCANO) were handed out to over 200 players, managers, supporters and sponsors to raise awareness to Kick It Out Campaign