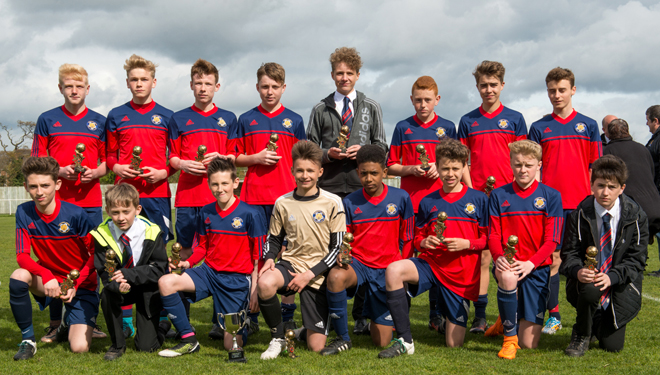 Harriers and Juniors Success at the Shropshire Charity Cup Finals

Shropshire Junior Football League would like to thank Market Drayton Town FC for hosting this season’s U13 and U14s Shropshire Charity Cup Finals and providing excellent hospitality to the league the Georgia Williams Trust and officials and players from all the cup final teams.

SJFL raises funds for charitable donations through the leagues charity cup competition for U10. U11, U13 and U14 age groups. Teams pay an entry fee and collect donations at their
cup matches along with clubs making separate donations and these funds are kept in a charity cup account. Each year the league nominate children’s/young people charities to receive the donation and last season the league raised over £2700 and donated £500 each to ﬁve charities – Cardiac Risk in The Young. The Harry Johnson Trust. Perry Riding for the Disabled Group. The Georgia Williams Trust and Red Cross Young Carers. Since the new millennium SJFL has raised over £23000 and gifted 51 charities.

This season’s’ finals were contested by Shrewbury Juniors and Shifanls Harriers at both U13 and U14 age groups and over £250 was raised on the day to add to the leagues charity fund.

After each final the Man of The Match Awards were presented by The Georgia Williams Trust who were pleased to provide and present the sponsored awards as ‘RESPECT’ partners to the Shropshire Junior Football League.

The U13 final was a even game with Juniors taking a first half lead before a equaliser late in the game by Shifnal to take the game into extra time before Harriers became winners following an exciting penalty shoot out 4-3.

U13 Man of The Match was presented to Josh Roura of Shifnal Harriers who is seen receiving his award from Lynnette Williams from The Georgia Williams Trust.

The U14 final was a more open game with Shrewbury Juniors winning comfortably 6-1 but a late consolation goal from Harriers helped give a good account of themselves and send their supporters home with something to cheer.

U14 Man of The Match was presented to Marcus Dillion of Shrewsbury Juniors (is 4 goals in the final helping the selection) and is seen receiving his award from John Dyas from The Georgia Williams Trust.

The league also extends great thanks to Kidz in Focus as official photographers to the league and all the actions shots taken on the day.

A copy of the match day cup final programme is also available to download here.