Kick It Out ‘Focus Week’

Charter Standard League of the Year

Kick It Out ‘Focus Week’ 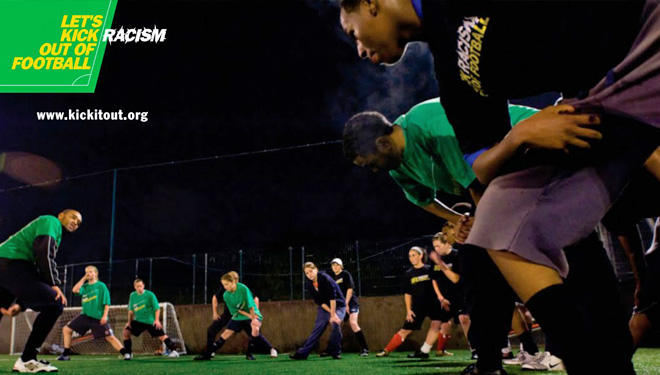 Kick It Out was established in 1993 and has spent the last 20 years campaigning to raise awareness and tackle discrimination in football with the aim of making the game accessible to everyone and at all levels, regardless of race, colour, gender or disability. Unfortunately, during the past couple of seasons we have seen examples of discrimination creeping back into the game, both in the professional game and at a local level.

Shropshire FA are organising a number of activities in schools over the coming weeks, to raise awareness of Kick It Out prior to the Annual Kick It Out Cup for Adults taking place on Tuesday 29th October ( info at  www.shropshirefa.com/news/2013/oct/shropshires-kick-it-out-cup).

As part of the campaign, Leagues and Clubs have been invited to show their support for Kick It Out. In order to support and raise awareness of the work that Kick It Out do, we would like to make the Shropshire Junior League fixture programme for next weekend Sunday 3rd November 2013, a Kick It Out focus weekend.

We would ask that all clubs and teams make their players and parents aware of this, and help to ensure that they are reminded that is everybody’s responsibility to ensure that unacceptable behaviour and discrimination are not acceptable in our game!!!

This is something that Shropshire Junior League fully supports and we would encourage all our clubs to showing their backing to this campaign.

For more information on Kick It Out, please visit, www.kickitout.org

Click on the links below to view relevant Futsal forms: