Referee of the Year – Robert Davies 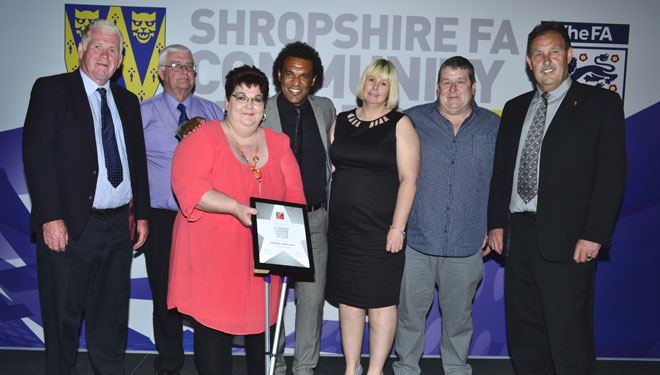 Shropshire Junior Football League
SJFL provides development football for mini soccer (U8-U10) and 9v9 teams (U11), open competition for U12 (9v9)& 11 a-side for U13 – U16 teams. Cup competitions for U11- U16 teams (including Charity Cup for U11, U13 and U14s) with a festival of finals held over two week-ends. This season SJFL is also providing U10 festivals in ‘champion’s league format’ with the group winners taking part at the league’s final days. All age groups have a winter break in December / January. The league utilises FA Full-Time to generate fixtures with SMS text for results (U12 – U16) and team managers submit match results and respect forms through this website.

Match officials are appointed to U13, U16 fixtures, cup matches & 100% of other games are covered by registered referees. SJFL secured a LRO grant from The FA that sponsored 10 candidates on a Referee’s course and will provide mentorship during their qualifying games. Next season match officials will be appointed to U14 football in addition to those this season.

SJFL Respect Futsal festival (now in seventh consecutive year) is a calendar event for mini-soccer teams U8-U10) that helps development of younger players and 53 teams entered this year – over 500 participants. SJFL successfully gained a grant from The FA for Futsal and purchased two sets of Futsal goals in partnership with The Sports Village, enabling security of the event at this venue until 2017. The league also sponsored 25x futsal coach and referee’s courses .

SJFL is committed to inclusivity and eliminating all forms of discrimination – gaining Silver Accreditation in 2013 (reaccreditation 2015) – and recognise that everyone in football has a collective responsibility to create a fair, safe and enjoyable environment in which the game can take place. As such teams must be supervised by two responsible adult members of the club, both hold valid FA DBS check, FA Safeguarding Children qualification and one has completed the FA Level1 coaching badge and FA Emergency Aid course. Last season’s The League’s overall Respect team winners enjoyed at day at Shrewsbury Town FC to receive their awards – part of the STFC’s club Community Sport Trust Partnership with the SJFL.

The FA CS programme – and being the ‘first’ FA CS League since 2009 – is key to club and league development as grassroots football continues to change, with different formats of the game being played, irrespective of ability, gender or ethnic origin. The McDonalds FA Community Charter Standard S League award for Shropshire & West Midlands has been presented to the league in 2010. 2012. 2013. 2014 and 2015 (excellent achievement) and SJFL continues to acknowledge and reward the excellent work carried out by our volunteer workforce which contributes to the league’s successes. This year SJFL embraced the new FA Youth Council imitative and co-opted the Chairman of the Shropshire Youth Council onto the management of the league.

The League continues to support local charities in raising awareness to their good work and also show how the football family contributes to the community. Last season the league raised over £1600 and presented £500 each to three children’s based charities at the League’s presentation day. Since the new millennium over £23000 as been raised to 51 charities.

Shropshire Junior Football League
Shropshire Junior League provides organised football for 22 clubs and 170 teams, with one hundred percent being FA Charter Standard Clubs. The League have implemented all the recommendations of the FA Youth Development Review including a new World Cup style Charity Cup competition for the Under 10s age group. The League continues to deliver a Winter Futsal Programme for the Under 8, 9 and 10 age groups, this year involving 53 teams and 125 games during January and February. The Futsal programme also included a coaching workshop for 25 coaches and training for Futsal specific referees.

The League has successfully implemented independent referee appointments for Under 13s and 16s age groups and has been awarded as an FA National Referee Development Programme Partner League. The appointments will be extended to the Under 14s age group next season. The League has also extended its use of FA Full-time to introduce a paperless system for results and match reporting for the Under 12s age group upwards, which will be extended to encompass all divisions for the 2015/16 season.
Shropshire Junior League is committed to its support of the FA RESPECT Campaign and has donated over £1600 to local charities over the past 12 months. The League was recently successful in renewing its FA Charter Standard League status for the second time.