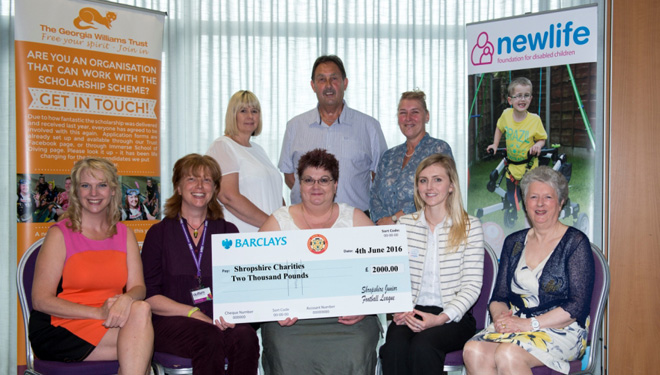 The Charity cheque presentation (all charities) – cheque for £2000

SJFL raises funds for charitable donations through the leagues charity cup competition were teams pay an entry fee and collect donations at their cup matches along with clubs making separate donations. The funds are kept in a charity fund account and each year member clubs and league nominate children’s/young people charities to receive the donation. This year the league raised over £2200 and donated £500 each to four charities . The charities this year were: Climbingout UK (Kelda Wood para Olympian): Autism West Midlands (Shropshire): Newlife Charity and Shrewsbury Mencap. Since the new millennium SJFL has now raised over £25000 and gifted 55 charities. Photo call includes all the charities and SJFL officers with cheque for £2000